You are here: Home › BlackBerry takes on iPad with PlayBook tablet
Updated on September 28, 2010 in Miscellaneous 0

The release of the ‘PlayBook’, a tablet PC from Blackberry on 27 Sepember, 2010 at the Blackberry Developer Conference is all set to gear up the company’s position in the tablet market. The ‘PlayBook’ tablet rooms a set of rich features that can provide a different experience to its users. The device is primarily meant for enterprise users but an average gadget user can also make good use of it. 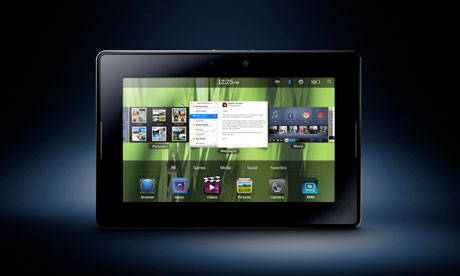 The 7 inch tablet weighs just 0.9 pounds with a sleek design measuring 9.7 mm in thickness.It includes a 1GHz dual core ARM Cortex A9 processor, a 1 GB RAM and 1024×600 multitouch display. Dual HD cameras (3 MP in front and 5 MP at the back) make it fit for video calling along with other extended features like WiFi, HDMI video output, USB and Bluetooth connectivity. Blackberry’s PlayBook employs new OS called Blackberry tablet OS which is based on a QNX neutrino microkernal architecture and supports latest technology like HTML5, Flash 10.1 and Open GL.All these features allow the product to provide a true multitasking environment.

PlayBook will be made available in the US in the first quarter of 2011 while the rest of the globe will have to wait till the second quarter of the same year. Pricing is not yet decided. However, a 3G and a 4G version has been planned for release in the future. PlayBook is sure to give tough competition to Apple’s iPad.