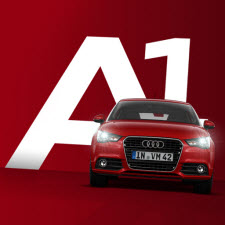 After a successful journey on Apple iPhones and iPod touch, ‘Audi A1 Beat Driver’, a racing game app, heads off for its release on iPad platforms. The iPad version of the game arrives with two new bonus tracks namely I Blame Coco’s ‘Single Machine’ and I Am Giant’s ‘City Limits’. Both these bonus tracks are absolutely free and accompanied by special bonus features like cover artwork, photos and artist biographies.Other than these exclusive tracks, the game also offers 19 free new music pieces from internationally acclaimed artists like La Roux, White Lies, Metric, The Rakes, Tommy Sparks, Don Diablo and Spleen United.The game offers an interesting blend of graphics and melody.
The gamer has to control the ‘AUDI A1’ car to collect markers while speeding through a kaleidoscopic 3D tunnel and avoiding hazards simultaneously. There are also options for collecting bonus icons and clearing the multiplier gauge to increase the scores as much as possible.The game also shelters a lot of other exciting features such as listing of the users name on the global Audi A1 Beat Driver Leader Board,challenging other player’s high scores and posting the scores on Facebook and Twitter accounts.

Audi A1 Beat Driver is compatible with iOS 3.2 or later and requires a 102 Mb storage space.The game is available as a free download from the Apple appstore.