You are here: Home › Google URL Shortener hits the web as Goo.gl
Updated on October 2, 2010 in Miscellaneous 0

The inconvenience and annoyance in handling long URL’s have resulted in the development of URL shorteners.Google’s URL Shortener had started its web voyage with a handful of Google services like Feedburner, Google Toolbar, Maps, Picasa and Blogger. Now, Google has launched a new website named Goo.gl, which provides a simple interface  to shorten URL’s and allows users to directly use the service.

Other than the URL shortening service, other services rendered by Goo.gl includes high speed, stability, robustness and automatic spam, malware, and phishing attack detection similar to Gmail. Another interesting feature offered is the analysis and history of the shortened URL’s like countries of the users clicking the URL, their browser, operating system and referral details. It also lists the number of click generated from the URL over various time ranges extending from ‘two hours’ to ‘all times’. 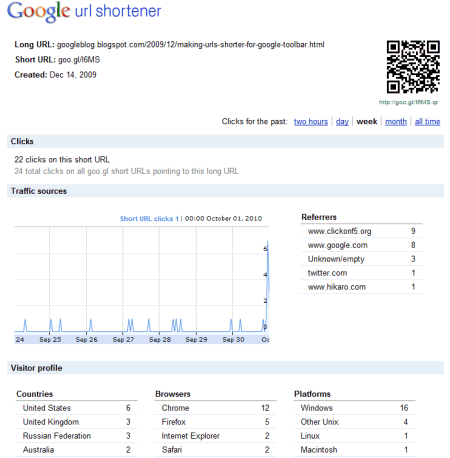 Goo.gl however, lacks its own API but has been successfully integrated as extensions into popular browsers like Firefox in the name of goo.gl lite and Chrome’s Shareaholic . A personal API has been proposed to be released in the near future which would allow users to shorten, expand and view analytics from within their applications. The web release of Google URL Shortener is sure to affect the position of other popular URL shorteners like Bit.ly.