You are here: Home › Morph your iPhone 4 into a Qwerty Slider with Nuu’s Mini-key
Updated on October 1, 2010 in Miscellaneous 0

Hong Kong based young accessory maker, Nuu has presented an interesting add-on for iPhone at the IFA, Berlin.It is called the Mini-key which is a physically a protective case for the Apple iPhone possessing a slideout with adjustable hinges and capable of morphing the iPhone into a QWERTY Slider.It comes packed with a tactile keyboard having raised keys and a backlight display.Mini-key connects with the phone via Bluetooth and eventually employs IOS 4’s built in support for keyboards.The keyboard response though a little week is well enough for efficient performance. 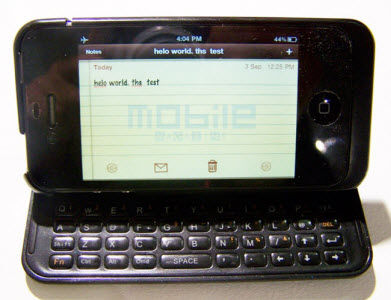 The biggest advantage of Mini-key is the built in battery to illuminate the keyboards backlight and hence it does not drain power from the iPhone.

It is a great peripheral for those people who find mailing and texting tough with Apple touchscreens.Not just that,Mini-key makes video watching a hands free experience.The product is supposed to arrive at stores by this christmas.A US launch is also being planned with a price tag around $69.Till then this prototype model is expected to be enhanced.
[Image Credit : mobilemag.com]