You are here: Home › New CandyBoard mini keyboard from VisionTek
Updated on October 1, 2010 in Miscellaneous 0 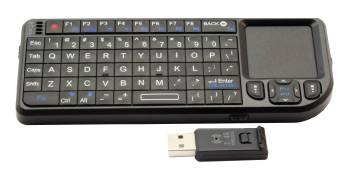 There aren’t enough types of keyboards on the market and that’s what VisionTek is trying to prove with its new and original concept keyboard called CandyBoard. This new keyboard only has 69 keys and 26 LEDs so it can be fully illuminated even when the light is low and visibility is weak.

Also this new keyboard has a touch-pad integrated so you can use it as a mouse too just like  a notebook touch pad, thus eliminating the actual need for a mouse and it doesn’t stop here. The device has a 2.4GHz wireless connectivity to be capable to integrate with home electronics such as your television for a distance of almost 10 metres and it comes with a built-in laser pointer and a rechargeable Li-ion battery.

This new device will be compatible with Windows, Linux and Mac and to be even more amazing, it will be compatile with PS3 and Xbox too, so you can use it almost for any device you may have in your house, such and Tvs, PCs and gaming platforms.

This new amazing device is available on sites like Amazon, Buy.com, Dell.com, NCIX and Newegg, and costs $89.99.