You are here: Home › Skype App for Android finally arrives
Updated on July 19, 2014 in Mobile Apps 0 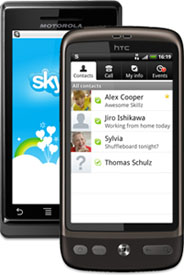 After a long wait, Skype has finally released an application for Android smartphones. After this release, Skype , the leading telephony service, has covered the three most popular mobile platforms-Android, iOS and Symbian. The app supports free Skype to Skype calls in the US over Wi-Fi. Outside US, it offers inexpensive rates to call other landlines or mobile phones over data connections like 3G, EDGE and GPRS. Besides it also provides Instant Messaging benefits in a group of two or more.

Users already having a Skype account will see their contact list once they sign-in with their mobile device, hence eliminating the hassle of creating a new account. However, first time users could create a new profile within minutes. Synchronization option between the contact list of Skype and phone  is also available, after which Skype calls can be placed directly form the phones native address book. However, there is no provision for video chat. Also there is a lack of support on some phones like the Samsung Galaxy S which the company wishes to address in the future. Its usage is limited to Android phones running version 2.1 or above. Currently, the Skype app is not available in China and  Japan.

Skype can be downloaded from the Android Market or from skype.com/m . More information on the app can be found on the Skype press release page.