You are here: Home › Sony Ericsson Xperia X8 to be available soon
Updated on September 25, 2010 in Miscellaneous 0 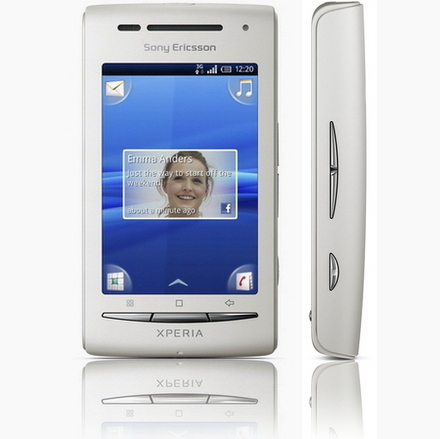 Sony Ericsson Xperia X8 has been announced in June and since then almost all of it’s features are well known even if it’s not yet launched on the market.Some rumours spread on the internet say that it might be officially launched this September.

The rumour is that Xperia will be available soon in North America for a price lower than $300.This brand new phone will be powered by a 600 MHz processor and will be running on Android.It will also be coming with a 3.0-inches TFT capacitive touch screen (320 x 480 pixels) with 16 Million colors support, a scratch-resistant surface that will protect the touch screen and an accelerometer sensor for UI auto-rotate.Other features it will have are HSDPA and Wi-Fi 802.11 b/g connectivity, 128 MB RAM and a microSD card that will be supporting up to 16GB( 2 GB is already included).

It’s camera will be a 3.2 -megapixel one, with geotagging and video recording capabilities ([email protected]), Stereo FM radio with RDS, 3.5 mm audio jack, GPS with A-GPS support, and Digital compass.

For a new phone made by Sony Ericsson, it is a pretty modest one comparing to the quality and high performance they  are accustomed to.